New versions of Bopup Messenger and Bopup Observer messaging clients have been released. These releases contain minor changes but include a few useful bug fixes.

Added support to restrict changing contacts if they are locked on the IM server
Bopup Messenger client now prevents changing contacts and blocks a launch of the Organize Contact List Wizard from the interface if the contacts are locked on the IM server. A new option to lock users' Contacts List from modifications has been introduced in the recent version 4.3.13 of Bopup Communication Server.

Fixed issues when message is going from offline user but only online contacts are shown
Another important fixes belong to functionality if the messenger displays only online users within Contact List. In that case the instant messaging client did not show blinking notifications in the contacts when a new offline message was received on a program startup and the sender was offline. It also fixed issues with displaying messages in conversations for recipients that have gone to offline mode but the messenger had unread messages from them.

New version 4.3.13 of Bopup Communication Server product is available. This version added a new option in addition to the newly represented function to organize and build users' Contact Lists from the console. Now it is possible to lock contacts in order to prevent their possible changes and modifications. 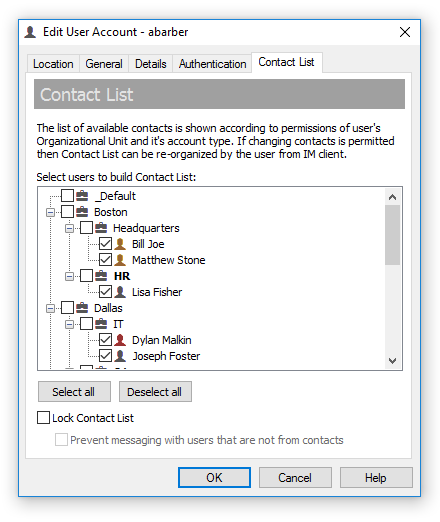 Since the IM server offers the function to automatically re-build Contact Lists when new users are added, deleted or moved then organizing custom contacts needed to be occurred every time when Contact Lists have been globally rebuilt. The new check box called "Lock Contact List" on the "Contact List" tab of the user's properties dialog allows to keep the contacts unchanged regardless modification in the user structure on the communication server. Of course, deleted accounts will be removed from locked lists but they will not be fully rebuilt from a list of available contacts.

Build and change users' Contact Lists from the IM server

We are happy to inform that new version 4.3.12 of Bopup Communication Server has been released today. This version comes with a great function that allows to change and tune users' buddy lists from Management Console personally for each user. It is now possible to do from user's properties dialog.

The list of available users shown on the Contact List tab is based on user's Organizational Unit permissions, so it is possible to add/remove contacts that are only visible to the user. Please note that users with Administrator account type may see and select all users available of the IM system.

The new feature of the communication server would be useful when changing contacts are not permitted to users themselves from messaging clients through appropriate option on the Contact List tab in the options. In this case users can have custom buddy lists even they are all located in the same Organizational Unit and this would be a great addition to existing OU permissions functionality.

New versions of the messenger and observer clients

We released new updates of the IM client software in the past few days. These are not major updates because come with a little changes.

The most important change in Bopup Messenger is a new hidden option that allows to do no show group messages sent by a recipient when a personal conversation is opened with him. The option called "HideGroupMessagesInConversation" and can be set on initial setup of the software using Setup.ini file or via Setup.ini Configuration Tool available as a stand-alone tool in Downloads.

Since current version of the IM server software contain an older version of the configuration tool it is impossible to use the new option in the client. The only way is to update the setupcfg.exe file in the installation directory of Bopup Communication Server manually once you download the tool from the website.

Another change is about AM/PM time format that has been added in previous release of the instant messaging clients. The messenger fixes displaying of 12:00 time when 12:00AM shown instead of 12:00PM.

The messenger client also resolves the problem with a scroll bar in conversations. It could appear in a middle of the screen if conversation includes many messages.