Bopup Messenger for Android has been updated to version 1.5.0 This release is built on Android Studio that lets us to support new requirements for applications on Google Play market regarding target SDK version. Previously we used Eclipse with Android SDK plugin that caused some issues with moving to recent Android SDK versions. 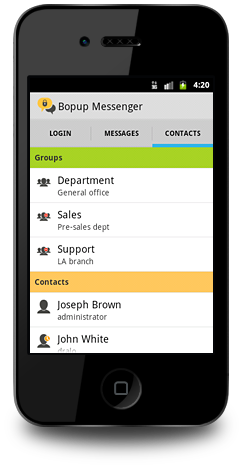 In addition the new version 1.5.0 added some changes and improvements. It levels up a minimum supported version of Android OS and the application can be run on Android OS version 4.0 and higher.

The messenger now automatically signs in and connects with the communication server without showing previously entered and stored credentials.